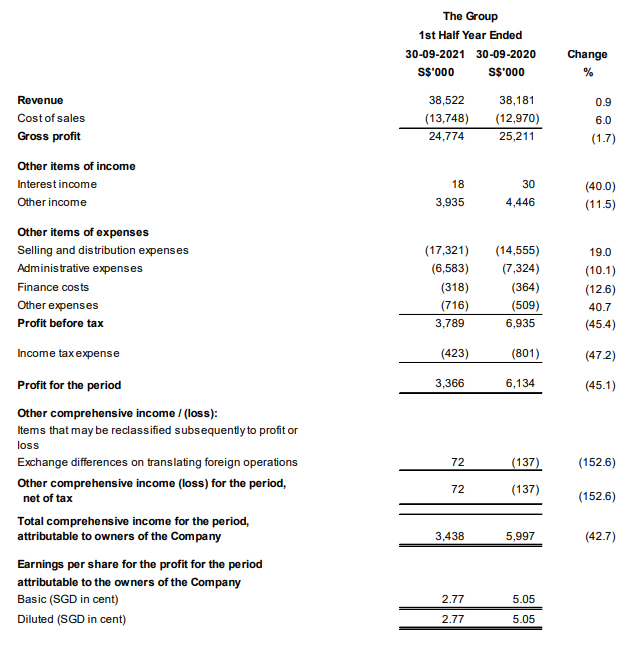 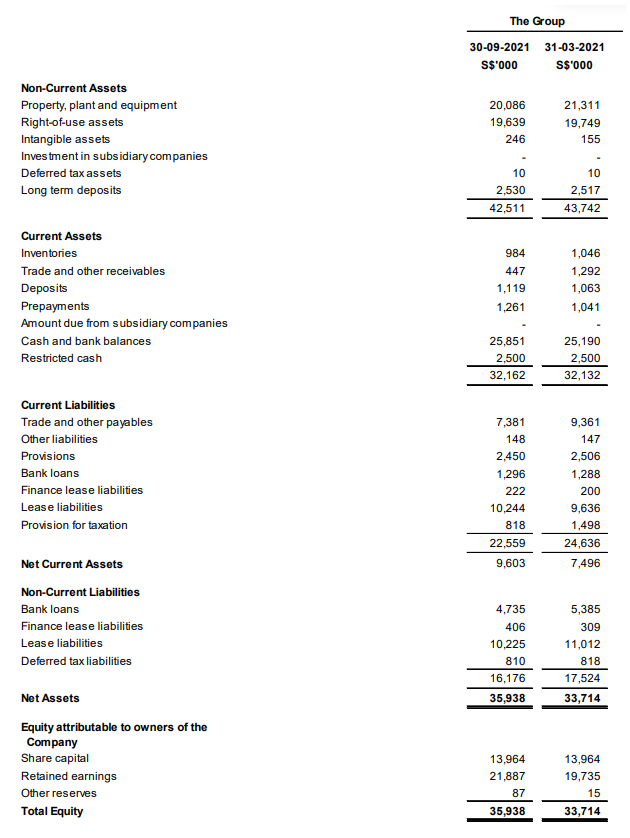 (A) Statement of Comprehensive Income

Revenue from other services, such as delivery and catering services, decreased by approximately S$7.4 million mainly due to absence of packed meals catering to foreign workers dormitories, partially offset by higher delivery revenue during the current period.

The Group’s gross profit margin decreased by 1.7% to 64.3% in 1H2022, mainly due to absence of economies of scale savings from the large-scale catering of packed meals to foreign workers dormitories.

The increase in selling and distribution (“S & D”) expenses was largely due to higher staff cost, to support the increase in retail revenue from outlets, absence of the waiver of foreign worker levies received in April 2020 and lower rental rebate of about S$2.0 million received from landlords, partially offset by lower depreciation expenses and packing material expenses during 1H2022.

The decrease in administrative expenses was mainly due to lower legal and professional expenses, lower entertainment and bonus provision arising from the decrease in profit for 1H2022, offset by higher medical, bank charges, property tax, and repair and maintenance expenses.

Other expenses increased by S$207,000 mainly due to

The decrease in depreciation expenses was mainly due to an increase in fully depreciated assets attributed to the right-of-use assets and property, plant and equipment, partially due to recognition of impairment for loss making outlets in the prior year.

The Group’s taxation expenses decreased by S$378,000 mainly due to the drop in profit before tax for the current period.

(B) Statement of Financial Position

The Group’s non-current assets decreased by approximately S$1.2 million, mainly due to

The Group’s current assets increased by approximately S$30,000 mainly due to:

In 1H2022, net cash used in investing activities amounted to approximately S$537,000. This was mainly due to additions of plant and equipment, and renovation costs for the Group’s new retail outlets, offset by proceeds from disposal of the Group’s motor vehicles.

The impact of Covid-19 on businesses in general has been unprecedented. While our retail revenue continues to show improvements and remains fairly resilient for the 6 months ended 30 September 2021 thus far, significant uncertainty still hangs over the entire retail sector both in Singapore and overseas.

Our retail revenues remain below pre Covid-19 levels as at to date, due to various social distancing measures put in place, resulting in operational losses for some of our retail outlets. The Group will continue to review if there is a need to provide for further impairment to our assets, depending on how Covid-19 pans out in the months ahead. While our overseas operations in Iskandar Malaysia, London and Perth have been similarly affected by Covid-19, the Group has sought new revenue streams including meal kit home deliveries and increased the range of snack deliveries and bento meals for our stay-at-home customers.

Since the onset of the pandemic, the Group continues to receive corporate catering orders for bento meals. With the stabilizing Covid-19 situation in general, consumer traffic and sentiment has improved. The Group will closely monitor if retail sales will continue to improve to pre Covid-19 levels in the coming weeks and months. However, with the re-opening of the economies, the Group noted that inflationary pressures have increased, in particular, raw material and labour costs, while rental costs remain elevated. The Group will continue with our efforts to reduce operating costs, improve operational efficiencies and seek more non-retail revenue streams, including beefing up our e-commerce presence and working with major e-commerce players during this challenging period.

The Group has been prudent with its spending over the past years. Provided that the health crisis does not deteriorate materially resulting in the complete closure of all our retail outlets for an extended period, the Board believes that the Group’s cash balance is sufficient to buffer against the impact of Covid-19 for at least the next 12 months.